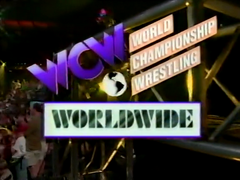 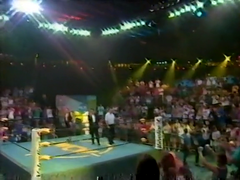 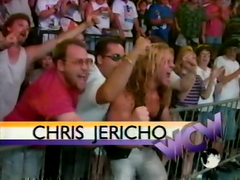 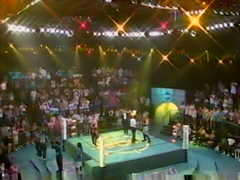 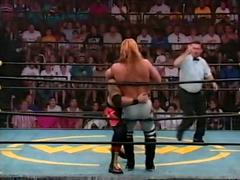 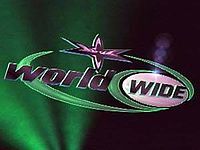 WCW WorldWide was a syndicated TV show produced by World Championship Wrestling aired from 1975 to 2001. The rights to WCW WorldWide now belong to WWE.

In 1978, to avoid confusion with ABC's Wide World of Sports (many newspapers would incorrectly mix the two shows up in their listings), JCP changed the name of the show to World Wide Wrestling. Rich Landrum became the new host and was joined shortly thereafter by veteran wrestler Johnny Weaver as color commentator.

In the summer of 1981, WRAL television opted not to renew its contract with JCP, citing that it needed the studio space to produce a new local version of PM Magazine. Crockett initially worked out a deal with WCCB television in Charlotte to house the tapings, but that fell through. So he instead went with WPCQ in Charlotte (a station immortalized by Ted Turner when it was WRET because the future cable mogul once held a telethon to save the channel from going bankrupt).

WPCQ (now WCNC) had briefly played host to tapings for Eddie Einhorn's International Wrestling Association in the 1970s so it seemed like a natural fit. The physical studio itself was very cramped however; the ring, television sets, banners, and camera platforms, which had been positioned symmetrically at WRAL, were now positioned.off-center.

Landrum left World Wide Wrestling in 1982 after being released by Jim Crockett Promotions in a cost-cutting measure. David Crockett left his position as Bob Caudle's color commentator on Mid-Atlantic Championship Wrestling to take over play-by-play duties on World Wide.

For a time, World Wide ran with a three-man announce team as wrestler Ray "The Crippler" Stevens joined. Rowdy Roddy Piper would also occasionally be thrown into the mix as well.

Not pleased with the studio situation, Crockett began to make plans to rectify matters and by July 1983, had moved his tapings out of WPCQ and into major arenas, buying a mobile TV truck for $1 million and hiring his own crew.

In 1984, Tony Schiavone replaced Weaver as color commentator on World Wide (with Weaver moving over to join Caudle on Mid-Atlantic). Schiavone had previously worked for JCP as the announcer for their minor league baseball team the Charlotte O's, and as the host of their market-specific promotional interview segments, which were used to promote events in individual towns. Tully Blanchard for a time joined World Wide as a color commentator as well.

WorldWide was originally made up of matches from television tapings around the country. From 1993, when Eric Bischoff took over, until 1996, the show was taped at Disney/MGM Studios. As such, these shows recorded, were the source of the infamous "Disney Tapings." After WCW left Disney, they moved production of WorldWide to Universal Studios Florida. In 1998, WorldWide became an in-studio recap show like its sister program WCW Pro had, with an exclusive match or two at the end of the show. These matches continued to be taped in Orlando as the WCW set had yet to be struck. In 1999, the WorldWide exclusive matches were moved out of Orlando and began being taped with WCW Saturday Night, which left it base in Atlanta in 1996 and had become a traveling show. Later still, the matches were moved a second time and began to be recorded before WCW Thunder tapings.

In November 2000, the show would change formats, no longer featuring exclusive matches, and instead showing matches from previous WCW pay-per-view events (as well as providing a recap of that week's Monday Nitro and Thunder).

WorldWide was cancelled along with Monday Nitro and Thunder the day before the World Wrestling Federation purchased WCW's tape library and intellectual property. At the time of its cancellation, WorldWide was the longest-running, uninterrupted weekly syndicated show of any kind on the air in the United States. The final episode of WorldWide aired on April 1, 2001, making it the last WCW television show aired.