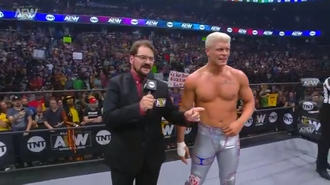 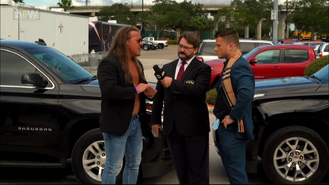 Noah Anthony Schiavone (born November 7, 1957) is an American sports commentator and podcaster best known for his work in professional wrestling. He currently works as a play-by-play commentator and senior producer for All Elite Wrestling (AEW), and he has previously worked for Jim Crockett Promotions, the World Wrestling Federation (WWF, now WWE), World Championship Wrestling (WCW), and Major League Wrestling (MLW). In addition to his work in wrestling, Schiavone has also worked as a broadcaster for the Gwinnett Braves/Stripers of Minor League Baseball and Georgia Bulldogs football.

In 2013, WWE noted that, "At the height of the Monday Night War, veteran broadcaster Tony Schiavone's voice was as vital to the onscreen product of World Championship Wrestling as Jim Ross' Oklahoma growl was to WWE.

Retrieved from "https://wrestlepedia.fandom.com/wiki/Tony_Schiavone?oldid=20601"
Community content is available under CC-BY-SA unless otherwise noted.