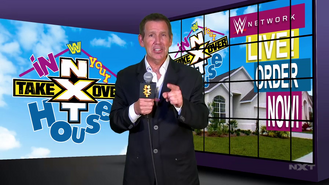 Todd Clark Pettengill is a radio disc jockey for WPLJ 95.5 in the New York area. He previously served as an on-screen backstage interviewer for the World Wrestling Federation from 1993 to 1997 as a backstage interviewer. He replaced Sean Mooney, who had elected not to renew his expiring WWF contract. He made his WWF debut as host of the Saturday morning program WWF Mania on January 9, 1993. Pettengill also hosted WWF Blast-Off, WWF LiveWire and WWF Action Zone. Pettengill made his WrestleMania debut at WWE WrestleMania 9. He performed the opening number "WWF Superstars" at the 1996 Slammy Awards. The following year, he presented the Slammy for "Miss Slammy" to Sable. His final pay-per-view appearance at SummerSlam in 1997; Pettengill had informed WWF executives that he wished to bow out of the company, as the grind of juggling his WWF duties and his radio career was proving to be too hectic. After SummerSlam, Pettengill left the WWF and was replaced by Michael Cole, whom he had recommended to the company. In 2013, Pettengill hosted segments of the WWE DVD release The Best of In Your House, a compilation of matches from the 1990s In Your House pay-per-view series.

Retrieved from "https://wrestlepedia.fandom.com/wiki/Todd_Pettengill?oldid=19892"
Community content is available under CC-BY-SA unless otherwise noted.