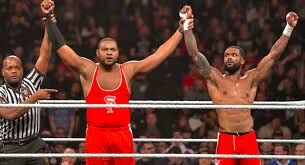 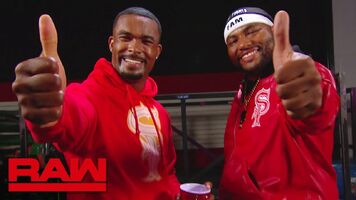 The Street Profits are a professional wrestling tag team performing in WWE, consisting of Angelo Dawkins and Montez Ford.

The team of Angelo Dawkins and Kenneth Crawford debuted on the March 16, 2016 episode of NXT, (taped on January 21), where they were defeated by The Hype Bros. The team would continue to work at house shows.

On the August 9, 2017, episode of NXT, now known as the Street Profits, they made their return by defeating The Metro Brothers. At this time, Kenneth Crawford was renamed Montez Ford. Street Profits would go on a winning streak, defeating the likes of The Ealy Twins, Riddick Moss and Tino Sabbatelli, and local wrestlers. On January 17, 2018, Street Profits suffered their first loss to The Authors of Pain, failing to win the NXT Tag Team Championship. Later on, they entered the Dusty Rhodes Tag Team Classic, where they would defeat Heavy Machinery in the first round, but were eliminated by The Authors of Pain in the semifinals. The Street Profits once again entered the Dusty Rhodes Tag Team Classic in 2019, but were defeated by Moustache Mountain in the first round.

Starting on July 1 2019, The Street Profits started appearing on Raw doing various backstage segments, a move that was said to be done in order to appeal to younger audiences. It was clarified by Dave Meltzer that the team were still NXT wrestlers and that this was not an official move to Raw. On October 11, during the WWE Draft, the Street Profits were drafted to Raw, officially bringing them to the brand. On the October 21 edition of Raw, the Street Profits defeated Luke Gallows and Karl Anderson in their debut match.