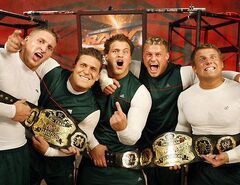 The Spirit Squad is a tag team that consists of Kenny and Mikey, who are both performing in WWE on the SmackDown brand. They were previously a stable that included Nicky, Mitch and Johnny. The team's ring personas were those of an all-male cheerleading squad.

Before forming the group, all members competed in Ohio Valley Wrestling, WWE's then developmental territory, where they were once opponents. In January 2006, the Spirit Squad made their television debut on the Raw brand. Three months later, the team won the World Tag Team Championship and, by "executive decision", were all collectively recognized as champions and internally decided which two defended the championship at any given time. Their reign marked the first time five wrestlers had been simultaneously recognized as World Tag Team Champions.

After losing the tag team championship in November 2006, the team disbanded, with Kenny the only member to appear on WWE television regularly. Nicky, Mikey and Johnny returned to OVW, where Mikey and Nicky formed a tag team, and Mitch was released from his WWE contract in May 2007. Today, only Nicky has been continually signed to WWE since their breakup, wrestling under the name "Dolph Ziggler," while Kenny and Mikey were re-signed to WWE in October 2016 and once again perform under the Spirit Squad moniker. Other members occasionally reunite on the independent circuit.