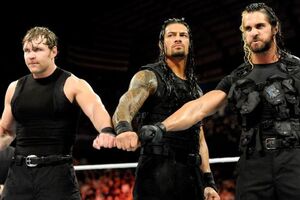 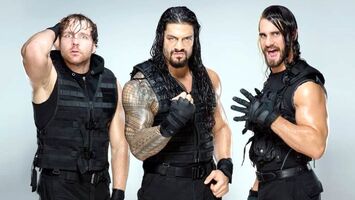 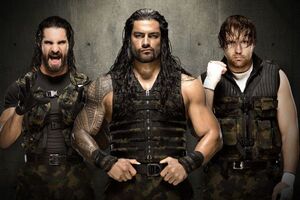 The Shield was a stable in WWE that consisted of Dean Ambrose, Roman Reigns, and Seth Rollins. Their original characters were mercenaries for CM Punk; however, they quickly became mainstay main-event names.

The group debuted on November 18, 2012 at Survivor Series. The Shield was a dominant force in six-man tag team matches with an undefeated televised streak lasting from December 2012 to May 2013, during which they scored a victory at WrestleMania 29. In May 2013 at Extreme Rules, all three members of The Shield won a championship, with Ambrose winning the United States Championship while Rollins and Reigns captured the WWE Tag Team Championship. Rollins and Reigns were WWE Tag Team Champions until October 2013, and Ambrose was United States Champion until May 2014, which was a record reign for the WWE version of the championship. As a Shield member, Reigns gained prominence by setting and equaling elimination records at the 2013 Survivor Series and the 2014 Royal Rumble events.

The Shield at various points served as hired guns for CM Punk and The Authority while later going on to face their former employers in separate feuds. They wrestled in the main event of numerous Raw and SmackDown television shows and headlined one pay-per-view, the 2014 Payback, which was their final match as a trio until 2017. Rollins left the group on June 2, when he attacked Ambrose and Reigns with a chair and sided with The Authority. Ambrose and Reigns went on their own ways as singles wrestlers later that month, marking the end of The Shield.

Following the group's dissolution, each member of The Shield went on to become a world champion. All three reigned as WWE World Heavyweight Champion within a three-minute span at the end of 2016's Money in the Bank: Rollins defeated Reigns for the championship and then Ambrose cashed in his Money in the Bank briefcase (which he won earlier that night) on Rollins to win the title.

In the lead-up to SummerSlam 2017, Ambrose and Rollins reunited and captured the Raw Tag Team Championship from Cesaro and Sheamus. Then on the October 9 episode of Raw, the trio reunited to feud with The Miz, Cesaro and Sheamus. In December 2017, the team dissolved once again after Ambrose suffered an injury. Following Ambrose's return from injury the previous week, The Shield reunited once again on August 20, 2018 episode of Raw to prevent Braun Strowman from cashing in his Money in the Bank contract on Reigns. However, in October that same year, The Shield disbanded following Reigns' hiatus over his leukemia rediagnosis and Ambrose's betrayal towards Rollins. After Reigns returned in February 2019 and announced that his leukemia was in remission, the trio reunited and won the main event match of Fastlane that same month. Although this was promoted as The Shield's final match together, they reunited at the special event The Shield's Final Chapter, Ambrose's final WWE match due to not renewing his contract.

Championships While A Team