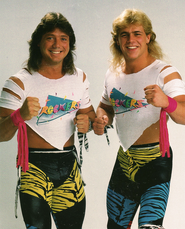 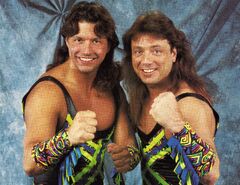 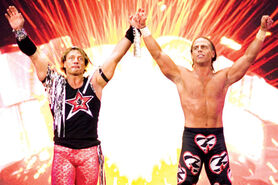 The Rockers were a tag team consisting of Shawn Michaels and Marty Jannetty who teamed from 1985 to 1992. The team worked for NWA Central States Wrestling, the American Wrestling Association, Continental Wrestling Federation, Continental Wrestling Association and the World Wrestling Federation. In 1992, the team had a violent kayfabe breakup that helped propel Michaels into the singles ranks with "The Heartbreak Kid" gimmick that he used until his retirement in 2010. After the breakup Michaels and Jannetty had an on again, off again feud due to Jannetty leaving the WWF on more than one occasion. In 1996, Jannetty teamed up with Leif Cassidy (later to be known as Al Snow) to form The New Rockers, but the team never achieved much success in the WWF and ended later that same year.

In 2005, The Rockers reunited for one night during Michaels' feud with Kurt Angle but nothing more came of it because Jannetty was released by WWE. In 2006, Jannetty was slated to return and work an extended angle, teaming with Michaels against Mr. McMahon and Shane McMahon, but only made two televised appearances before being released from his contract. Instead, WWE reformed Michaels' other team, D-Generation X, to fill the storyline.