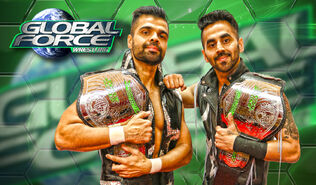 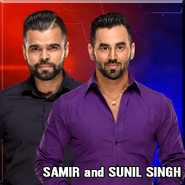 The Bollywood Boyz are a tag team composed of real-life brothers Gurvinder and Harvinder Sihra. They are currently signed to WWE, performing on the SmackDown brand, under their respective wrestling names Sunil and Samir Singh, collectively known as The Singh Brothers.

On 13 June 2016, Gurv and Harv were announced as participants in WWE's Global Cruiserweight Series tournament. On the April 18 2017 episode of SmackDown, Gurv and Harv, now referred to as Sunil Singh and Samir Singh, respectively, or the Singh Brothers, made their SmackDown debut interfering in a six-pack challenge match to determine the number one contender for Randy Orton's WWE Championship at Backlash, helping Jinder Mahal win the match.

Retrieved from "https://wrestlepedia.fandom.com/wiki/The_Bollywood_Boyz?oldid=17714"
Community content is available under CC-BY-SA unless otherwise noted.