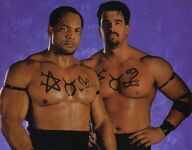 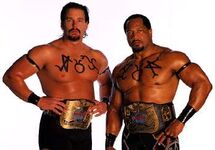 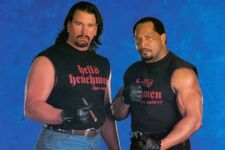 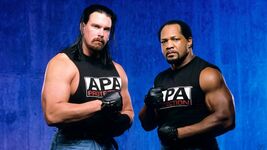 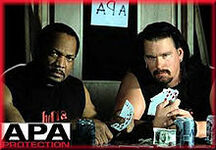 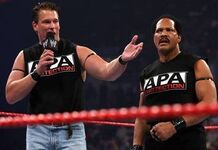 The Acolytes Protection Agency (APA) was a professional wrestling tag team that consisted of Bradshaw (John Layfield) and Faarooq (Ron Simmons). They wrestled for the American promotion World Wrestling Federation/Entertainment (WWF/E) between October 1998 and March 2004.

Before forming the APA, Faarooq and Bradshaw were known simply as The Acolytes and went on to become a part of The Undertaker's Ministry of Darkness. As The Acolytes, they won two World Tag Team Championships in 1999, while feuding with X-Pac and Kane and The Hardy Boyz. After renaming themselves the Acolytes Protection Agency in 2000, they functioned as bodyguards to other wrestlers, and won a third tag team championship in 2001.

In 2002, the duo was split during the brand extension, where Simmons went to SmackDown!, as Bradshaw went to Raw. As a singles competitor, Bradshaw had an extensive hardcore wrestling career, winning the Hardcore Championship on various occasions. The two reunited as a tag team in Ohio Valley Wrestling and then on SmackDown! in 2003. The team again split in 2004 when Simmons was on-screen released by WWE; Layfield continued his singles career before retiring in 2009.