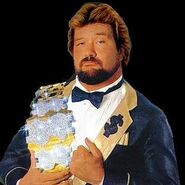 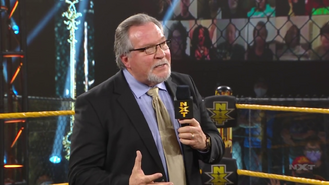 Theodore Marvin "Ted" DiBiase Sr. (born January 18, 1954 is an American former professional wrestler, manager, ordained minister and color commentator. He is signed with WWE working in their Legends program. DiBiase achieved championship success in a number of wrestling promotions, holding thirty titles during his professional wrestling career. He is best recalled by mainstream audiences for his time in the World Wrestling Federation (WWF), where he wrestled as "The Million Dollar Man" Ted DiBiase.

Among other accolades in the WWF, DiBiase was the first WWF North American Heavyweight Champion, a three-time WWF Tag Team Champion (with Irwin R. Schyster) and the 1988 King of the Ring. DiBiase also created his own championship, the Million Dollar Championship. He was well known for his cutting-edge heel promos, which were often concluded with his trademark evil laugh; DiBiase has been described by WWE as the organization's "most despised villain" during the late 1980s. He held the WWF Championship belt in 1988 after purchasing it from Andre the Giant, but this period is not recognized by WWE as an official title reign. Nonetheless, DiBiase frequently headlined WWE cards, including WWE WrestleMania 4 and the first ever SummerSlam in 1988. He has been cited as one of the finest in-ring technicians in history.

DiBiase headlined the 2010 WWE Hall of Fame ceremony, being inducted by his sons, Ted Jr and Brett.

Theodore Marvin "Ted" DiBiase, Jr. (November 8, 1982) is an American professional wrestler currently appearing on the independent circuit. He is best known for his run with WWE, where he is a former two time World Tag Team Champion with his tag team partner, Cody Rhodes. After being trained by Chris Youngblood and undergoing further training at Harley Race's Wrestling Academy, DiBiase made his professional wrestling debut on July 8, 2006. He won the Fusion Pro Tag Team Championship with his half brother, Mike DiBiase, in February 2007, and also toured Japan briefly with Pro Wrestling Noah. He signed a developmental contract with WWE in July 2007, and was assigned to their developmental facility, Florida Championship Wrestling (FCW). He joined the Next Generation Hart Foundation faction for a short time, before winning the FCW Southern Heavyweight Championship in December 2007. Due to injury, he relinquished the championship in January 2008.

He made his WWE television debut on May 26, 2008, and in his first match as a member of the Raw roster, he won the World Tag Team Championship with Cody Rhodes. They dropped the championship in August, before winning it again a week later. Rhodes and DiBiase were joined by Manu shortly afterwards, forming a faction of multi-generation wrestlers, although shortly afterwards DiBiase was taken off television to film The Marine 2. Upon his return, he formed The Legacy faction alongside Rhodes and Randy Orton.

Aside from professional wrestling, DiBiase is also an actor, making his film debut in The Marine 2, a direct-to-DVD movie that was released on December 29, 2009.