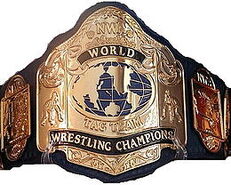 The TNA World Tag Team Championship was a world tag team championship owned by the Impact Wrestling promotion. It is primarily contested within Impacts's tag team division. It was created and debuted on May 14, 2007 at the taping of TNA's primary television program, TNA Impact!. It was officially introduced worldwide on the May 17, 2007 edition of TNA's online podcast TNA Today.

Creation of the TNA Titles

In 2017 when TNA was purchased by Anthem Sports, the TNA name was dropped and the titles were recreated as the Impact Wrestling (Breifly GFW Tag Team Chmpionships.

Vacated - June 28, 2002 - The Shanes vacate the titles per request of Total Nonstop Action Wrestling, who gets full control over the titles.