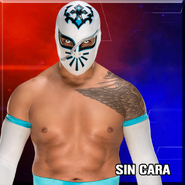 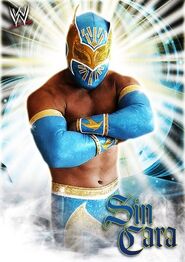 Sin Cara is a professional wrestling character used by WWE and is a former NXT Tag Team Champion. Originally used by Mexican lucha libre star Luis Urive, it is currently used by Mexican American wrestler Jorge Arias. Spanish for "Without Face" or "Faceless", Sin Cara wears a lucha-style mask that completely covered his face, much like when Urive wrestled for the Consejo Mundial de Lucha Libre (CMLL) as Mistico. This is in stark contrast to other lucha stars who would at least have eye sockets and a mouth area open, such as when Arias wrestled for the Asistencia Asesoría y Administración (AAA) as Incognito, as well as Rey Mysterio, with whom the Sin Cara character has had an on-off alliance with during his WWE stint. Additionally, the lights at ringside dim to a yellow shade during the Sin Cara character's matches.

While the Sin Cara character always speaks Spanish, whether or not the character also speaks English has varied on whoever portrays the Sin Cara character. Arias's portrayal of Sin Cara is bilingual due to Jorge Arias having grown up in the United States near the Mexico–United States border, and thus speaks either Spanish or English, depending on the intended audience. However, Urive (legitimately) does not know English, and during his time in WWE often required a translator during promos.