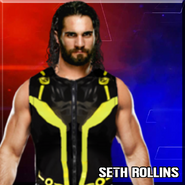 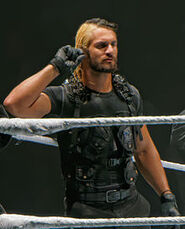 Colby Lopez (born May 28, 1986) is an American professional wrestler who is currently signed to WWE under the ring name Seth Rollins. He is a former WWE Tag Team Champion with partner Roman Reigns as part of The Shield, and is the current Money in the Bank contract holder. While at WWE's developmental territories Florida Championship Wrestling (FCW) and WWE NXT, he was the inaugural NXT Champion and was also the first ever FCW Grand Slam Champion. Prior to signing with WWE, he wrestled as Tyler Black for Ring of Honor (ROH) – winning that promotion's World Championship and Tag Team Championship – as well as various independent promotions. At WWE Wrestlemania 31 Rollins became the first former NXT Champion to become WWE Champion.