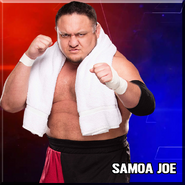 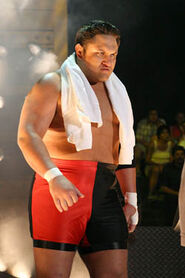 Nuufolau Joel Seanoa (born March 17, 1979), is an American professional wrestler and color commentator, better known by the ring name Samoa Joe. He is currently signed to WWE where he appears on NXT as an assistant and special enforcer for on-screen general manager William Regal. He is also known for his time in Total Nonstop Action Wrestling (TNA) and Ring of Honor (ROH).

He established himself in ROH from the promotion's beginning in 2002, holding the ROH World Championship for a record 21 months from March 2003 to December 2004. Upon joining TNA in June 2005, he embarked on a 19-month-long undefeated streak, and went on to hold the TNA World Heavyweight Championship once, the TNA X Division Championship five times, the TNA World Tag Team Championship twice, and the TNA Television Championship once; completing the TNA Triple Crown and the TNA Grand Slam. He also wrestled internationally and on the independent circuit for various promotions, winning several titles, including the GHC Tag Team Championship with Magnus in Pro Wrestling Noah, and he was an inaugural NWA Intercontinental Tag Team Champion with Keiji Sakoda in Pro Wrestling Zero1. He left TNA in February 2015, briefly competing again in ROH and the independent circuit.

Joe officially debuted in WWE's then-developmental territory NXT in May 2015, and signed a full-time contract with the company in June; he went on to become the first-ever two-time NXT Champion, and the co-winner of the inaugural Dusty Rhodes Tag Team Classic (with Finn Balor). After joining the main roster in January 2017 and being assigned to the Raw brand, he headlined several WWE pay-per-view events and contended for the WWE Universal Championship, and later the WWE Championship during his time on the SmackDown brand. In March 2019, Joe won his only title on the main roster, the United States Championship. Following several injuries, he became a color commentator on Raw. He was released from his contract in April 2021, but was re-signed just two months later to be an on-screen authority figure on NXT.