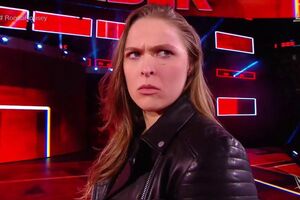 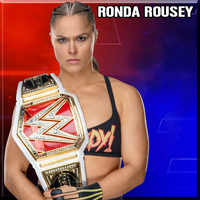 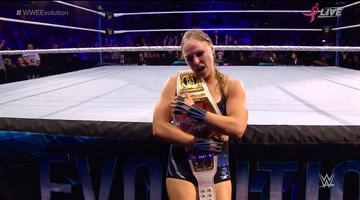 Rousey was the first American woman to earn an Olympic medal in judo (bronze), which she won at the 2008 Summer Olympics in Beijing. She is the former UFC Women's Bantamweight Champion, as well as the last Strikeforce Women's Bantamweight Champion. She won 12 consecutive MMA fights, six in the Ultimate Fighting Championship (UFC), before suffering her first loss, to Holly Holm in November 2015. She won 11 of those fights in the first round, nine of them by armbar submission. Rousey trains under Gokor Chivichyan of the Hayastan MMA Academy, and Edmond Tarverdyan of the Glendale Fighting Club.

In May 2015, two magazines ranked Rousey as the most "dominant" active athlete. In September 2015, voters in an online ESPN poll selected Rousey as the Best Female Athlete Ever. Later that month, she claimed to be the UFC's highest paid fighter, male or female. In 2015, she was the third most searched person on Google.[13] As of January 2017, Rousey is ranked the #4 female bantamweight fighter in the world according to the UFC, and #9 by Sherdog.

Rousey's first feature film role was the 2014 film The Expendables 3. In 2015, she had roles in the films Furious 7 and Entourage.

Rousey made a surprise appearance at WWE Royal Rumble 2018, confronting Raw Women's Champion Alexa Bliss, SmackDown Women's Champion Charlotte Flair, and Asuka, who had just won the inaugural women's Royal Rumble match. ESPN immediately revealed during the segment that she had signed a full-time contract with WWE. The jacket which Rousey wore during this appearance belonged to "Rowdy" Roddy Piper, given to her by his son. On February 25 at WWE Elimination Chamber 2018, Rousey was involved in an in-ring altercation with Triple H and Stephanie McMahon, after which she signed her contract, thus making her a part of the Raw brand. On the March 5 episode of Raw, it was announced that Rousey's in-ring debut would take place at WWE WrestleMania 34, WWE's flagship event; it will be a mixed tag team match with Kurt Angle as her partner, against Stephanie McMahon and Triple H. At WWE SummerSlam 2018 Rousey won the Raw Women's Championship from Alexa Bliss.