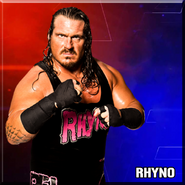 Rhyno made an unannounced return to WWE on February 18, 2015 during the taping of its developmental program NXT, defeating Elias Samson. After a few weeks of defeating local competitors, Rhyno announced that he was in NXT to win the NXT Championship. On the July 26 episode of SmackDown Live, Rhyno returned to attack "free agent" Heath Slater with his signature Gore. At WWE Backlash 2016, he and Slater beat The Usos to become the inaugural champions, while also granting Slater a contract as well. The victory marked Rhyno's first title victory in WWE in nearly 15 years, and his first title under the WWE banner.