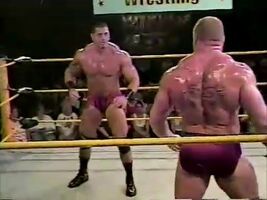 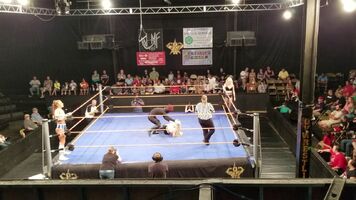 Ohio Valley Wrestling (OVW) is an American independent professional wrestling promotion based in Louisville, Kentucky. OVW was initially a member promotion of the National Wrestling Alliance from its inception in 1997 until 2000, when it became the primary developmental territory for the World Wrestling Federation (now WWE). OVW remained in this role from 2000 until 2008. The promotion was unaffiliated from February 7, 2008 until November 2011, and is run by owner Nightmare Danny Davis.

In 2012, OVW became the farm territory for Total Nonstop Action Wrestling (TNA). However, the relationship ended on November 2, 2013. As of December 2011, over 100 OVW alumni have appeared in WWE.

The OVW Television Championship is the secondary championship of Ohio Valley Wrestling started on January 5, 2005. When the title was originally conceived, the champion defended against randomly selected opponents, with the winner receiving a check for $1000. The title became represented by a large trophy in the summer of 2005, before being changed to a traditional championship belt in the spring of 2006.

The OVW Tag Team Championship is the tag team titles of Ohio Valley Wrestling. Created in 1997, the first champions were Nick Dinsmore and Flash Flanagan.

The OVW Women's Championship (also known as OVW Ladies Championship) is a championship in Ohio Valley Wrestling (OVW). The first holder of the title was ODB, who declared herself champion in August 2006. The belt was defended as any other championship in professional wrestling until Serena Deeb declared she would defend the belt under 24/7 rules in May 2008. These rules lasted until Melody Medeiros won the belt in November 2008.

The title was created in February 9. 1999 and was retired in March 1 2001 due to the company's withdrew from its membership from the NWA in 2000 and became one of the first developmental territory for World Wrestling Federation (now WWE). the title was originally scheduled to be defended for the vacated OVW Light Heavyweight Championship at the live event tapings. but however since its was short lived, the title was declared retired Rather than being exclusively used to defended as their own light heavyweight championship belt, meaning that the OVW Light Heavyweight Championship is now being represented by a trash can. the final champion was Chris Michaels, who defeated the former champion Sean Casey at the OVW TV Tapings to win the title.