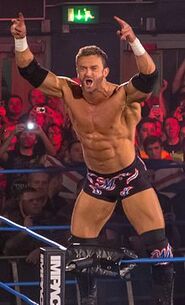 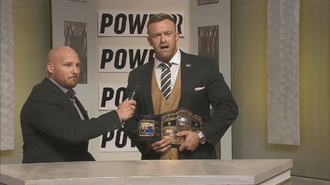 Nicholas "Nick" Aldis (born November 6, 1986) is an English professional wrestler signed to Global Force Wrestling competing under his real name. He is best known for working for the American professional wrestling promotion Total Nonstop Action Wrestling under the ring name Magnus, where he is a former one-time TNA World Heavyweight Champion, two-time TNA World Tag Team Champion and one-time IWGP Tag Team Champion. In professional wrestling, he is the third English world heavyweight champion in history after Gary Steele with the NWA World Heavyweight Championship in 1999 and Nigel McGuiness with the ROH World Championship in 2007, although TNA recognises him as the first.

Aldis also appeared on the United Kingdom revival of Gladiators, where he was known by the name Oblivion. Aldis, working under his real name, is also a co-presenter of Britain's Strongest Man on Challenge TV in the United Kingdom

Retrieved from "https://wrestlepedia.fandom.com/wiki/Nick_Aldis?oldid=23479"
Community content is available under CC-BY-SA unless otherwise noted.