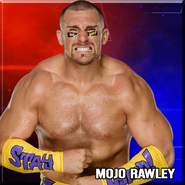 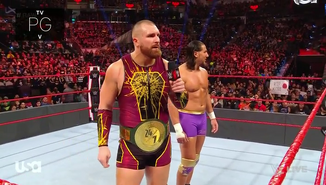 Dean Muhtadi (born July 17, 1986) is an American professional wrestler and former defensive lineman currently signed to WWE, where he performs under the ring name Mojo Rawley. Rawley made his WWE television debut on the May 29, 2013 episode of NXT, competing in a battle royal that was won by Bo Dallas. On the October 9 episode of NXT, Rawley adopted a high-energy character based on the concept of "staying hyped"; Rawley explained that if getting hyped allowed superhuman achievements, he would take it one level higher by staying hyped.

On July 19 2016, Rawley was called up to the main roster as a supplemental pick in the 2016 WWE draft, being selected in the 11th round by SmackDown, the brand in which his partner Zack Ryder wrestled. He made his main roster debut at WWE Battleground 2016, helping Ryder against being assaulted post-match by Rusev. On April 16, Rawley was drafted to Raw as part of the 2018 WWE Superstar Shake-up.