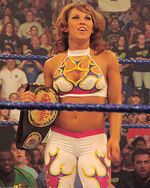 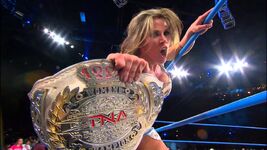 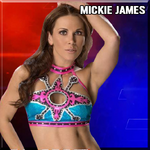 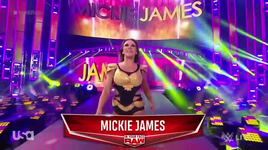 James began her professional wrestling career in 1999 as a valet on the independent circuit, where she was known under the name Alexis Laree. She trained in several camps to improve her wrestling abilities before working for Total Nonstop Action Wrestling (NWA:TNA) in June 2002, where she gained national attention. After only a few appearances, she joined a stable called The Gathering and was written into storylines with the group. She is also the only woman to be involved in Clockwork Orange House of Fun matches.

James appeared in World Wrestling Entertainment (WWE) in October 2005 and was placed in a storyline with Trish Stratus, in which James' gimmick was that of Stratus' biggest fan turned obsessed stalker, an angle which lasted almost a year. She received a push, and she won her first WWE Women's Championship at WWE WrestleMania 22, a title she has held a total of five times. James also won her first Divas Championship at WWE Night of Champions 2009 to become the second of five Divas to hold both the Women's and Divas titles. She was released from the company on April 22, 2010, after which she returned to Total Nonstop Action Wrestling (TNA).

In TNA, James won the TNA Knockouts Championship three times and the 2013 TNA World Cup with Team USA. She left TNA in September 2013. Between WWE and TNA, James is a nine-time champion, which is a national record and is also the only person to hold the WWE Women's, WWE Divas and TNA Knockouts Championships in wrestling history. Pro Wrestling Illustrated ranked James as the number one female wrestler in 2009, and she was also voted Woman of the Year twice, first in 2009 and again in 2011 by readers of PWI magazine. In 2014 she married Magnus.

Retrieved from "https://wrestlepedia.fandom.com/wiki/Mickie_James?oldid=22296"
Community content is available under CC-BY-SA unless otherwise noted.