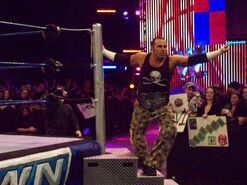 Matthew Moore Hardy (born September 23, 1974) is an American professional wrestler is best known for his tenures with TNA and the WWE.