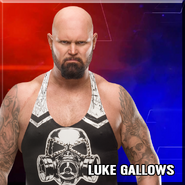 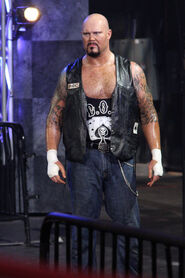 Hankinson was also known for his appearances as an impostor of the wrestler Kane, and the tag team partner of Jesse while they were part of the tag team Jesse and Festus on the SmackDown brand. After a few months, he reappeared as the enforcer and "disciple" of CM Punk, sporting a cleaner, militant look, with the Festus character's "real identity" revealed as Luke Gallows.

On the April 11 episode of Raw, Gallows and Karl Anderson made their debut, attacking The Usos after their victory over The Social Outcasts, before being removed by several referees. Gallows won his first WWE Titles at WWE Royal Rumble 2017.