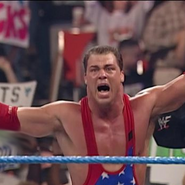 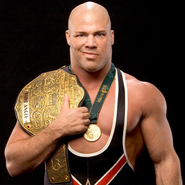 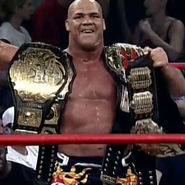 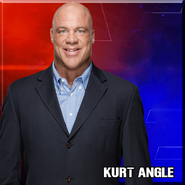 Kurt Steven Angle (born December 9, 1968) is an American professional wrestler, amateur wrestler and actor previously signed with Total Nonstop Action Wrestling (TNA) and the World Wrestling Federation/Entertainment (WWF, now WWE). Angle competed in amateur wrestling in high school and college. In college at Clarion University of Pennsylvania, he won numerous accolades, including being a two-time National Collegiate Athletic Association Division I champion. After graduating, he won a gold medal in freestyle wrestling at the 1995 World Wrestling Championships. Angle then competed in the 1996 Summer Olympics in Atlanta, Georgia, where he won a gold medal in heavyweight freestyle wrestling. He is one of only four people to complete a Grand Slam in amateur wrestling (junior nationals, NCAAs, World Championships and the Olympics). In 2006, he was named the single greatest shoot wrestler and one of the top 15 college wrestlers of all time by USA Wrestling.

Angle made his first appearance at a professional wrestling event in 1996, with his in-ring debut following in 1998. He had previously turned down an offer to join the WWF, but signed a multi-year contract with the company that year, and participated in his first televised storyline in March 1999. After months of unaired matches, Angle made his official debut that November and received his first major push in the company in February 2000, when he held the European Championship and the Intercontinental Championship simultaneously. Four months later he won the King of the Ring tournament, and not long after, began pursuing the WWF Championship, which he won in October; this capped off a rookie year which is considered by many as the greatest in professional wrestling history. Throughout his tenure in the company, Angle was a six-time world champion (a four-time WWF/E Champion, a one-time World Heavyweight Champion, and a one-time WCW Champion), and he also held the WCW United States Championship, Intercontinental Championship, European Championship, Hardcore Championship, and WWE Tag Team Championship once each. He is the tenth Triple Crown Champion and the fifth Grand Slam Champion in WWE history.

In 2006, he became the only person to be rostered on all 4 major wrestling brands, (January - Raw, January to June - SmackDown, June to August - ECW, August to December - TNA).

After leaving WWE, Angle joined TNA, where he became a record six-time TNA World Heavyweight Champion, a two-time TNA World Tag Team Champion, and a one-time TNA X Division Champion, also the second Triple Crown Champion in TNA history and the only one to hold all the required titles at once. While in TNA, his then real-life wife Karen began accompanying him to the ring and playing a part in his on-screen storylines. As part of TNA, Angle has also made appearances for New Japan Pro Wrestling (NJPW) as well as Inoki Genome Federation (IGF), where he held their version of the IWGP Heavyweight Championship.

Angle is the only wrestler in history to be a Triple Crown winner in both WWE and TNA, and to have held every currently active championship in both companies. He is only one to have held the WWE, WCW, TNA, IWGP, and World Heavyweight Championships in his career. Angle is also a two-time King of the Mountain winner, winning at the 2007 and 2009 Slammiversary pay-per-view event, making him the only wrestler to have been both King of the Ring (WWE) and King of the Mountain (TNA). Between WWE, TNA, and Japan, Angle has won 13 world championships and 21 total championships. In 2010, the Wrestling Observer Newsletter named Angle the Wrestler of the Decade of the 2000s,[7] and in 2013 he was the second inductee into the TNA Hall of Fame. He has also headlined multiple pay-per-view events for both WWE and TNA, including the flagship event for both promotions, WWE WrestleMania and TNA Bound for Glory. In 2013, Kurt Angle was inducted into the TNA Hall of Fame.

On January 16 2017, it was announced that Angle would headline the WWE Hall of Fame. On March 16, WWE revealed that his long-time rival John Cena would induct Angle at the Hall of Fame ceremony. On the April 3 episode of Raw after WWE WrestleMania 33, Angle made his first WWE appearance in nearly 11 years after Mr. McMahon appointed Angle as the new General Manager of Raw. On October 20, WWE announced that Angle would make his WWE in-ring return after 11 years, replacing Roman Reigns due to medical issues, and teaming with Dean Ambrose and Seth Rollins to face The Miz, Cesaro, Sheamus, Braun Strowman, and Kane in a 5-on-3 handicap match Tables, Ladders, and Chairs match at TLC: Tables, Ladders & Chairs. He also captained Team Raw at WWE Survivor Series 2017