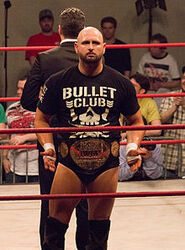 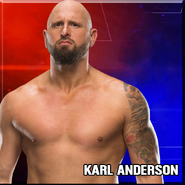 Chad Allegra (born January 20, 1980) is an American professional wrestler better known by his ring name "The Machine Gun" Karl Anderson. He was previously signed to WWE. Anderson is best known for his work as a tag team wrestler, particularly in Japanese promotions like Pro Wrestling Noah and New Japan Pro Wrestling, where he is a former four-time IWGP Tag Team Champion. He holds the record for the longest reign and the most defenses with the title, achieved on his first reign with former partner Giant Bernard. Anderson and Bernard are also former Pro Wrestling Noah's GHC Tag Team Champions. Anderson is also a three-time winner of NJPW's top tag team tournament, the G1/World Tag League, having won it in 2009 with Bernard, in 2012 with Hirooki Goto and in 2013 with Doc Gallows. He also wrestled for Southern California-based independent promotion Pro Wrestling Guerrilla (PWG) between 2007 and 2009. He joined WWE in 2016.