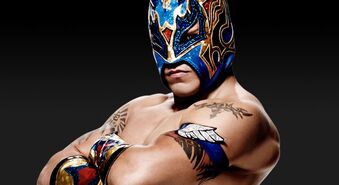 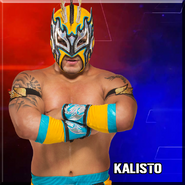 Emanuel Alejandro Rodriguez (born November 14, 1986) is a Mexican American professional wrestler currently signed to WWE under the ring name Kalisto. He made his professional wrestling debut in 2006, working under a mask and the ring name Samuray del Sol (Spanish for "Samurai of the Sun") on the Midwestern United States independent circuit. Having established himself as one of the top high-flyers in the area, he began working for larger national and international promotions in 2011 and was signed by Dragon Gate USA in 2012. The same year, he made his debut for Mexican promotion Asistencia Asesoría y Administración (AAA), where, in November, he was repackaged as Octagón Jr., the storyline protégé of well-known luchador Octagón. He has also worked for promotions such as Combat Zone Wrestling (CZW), Independent Wrestling Association Mid-South (IWA-MS), National Wrestling Alliance (NWA), and Pro Wrestling Guerrilla (PWG). In May 2013, he signed a contract with WWE and was assigned to their developmental territory WWE NXT Wrestling, where he was renamed Kalisto. In September 2014, Kalisto, alongside Sin Cara as the team "The Lucha Dragons", won the NXT Tag Team Championship. In February 2015, The Lucha Dragons were promoted to WWE's main roster.