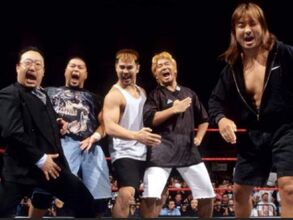 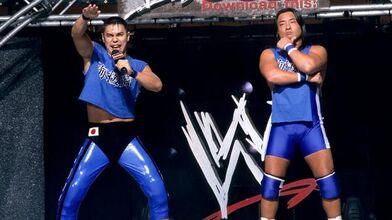 Kai En Tai (also spelled Kaientai) was a professional wrestling stable made up of Japanese wrestlers Shiryu, Dick Togo and Mens Teioh, later joined by Sho Funaki and Taka Michinoku. The group was managed by Yamaguchi-San when they were in the WWF.

The group debuted in Japan's Michinoku Pro wrestling promotion in late 1994 when SATO, Terry Boy and Shiryu introduced themselves as Kai En Tai. The name "Kai En Tai" was based on Japan's first modern corporation, Kaientai ("Naval Auxiliary Force"), a naval institution and paramilitary organization dedicated to freeing Japan from feudal rule and protecting the country's national sovereignty that was a major player in the introduction of the Meiji Restoration. Dick Togo named his faction "Kaientai" in its honor.

In early 1997, Taka Michinoku, Dick Togo and Terry Boy had a short stint in Extreme Championship Wrestling as BWO Japan (also known as "BWO International") and feuded with the fellow Japanese team of The Great Sasuke, Gran Hamada and Gran Naniwa. The rivalry culminated at ECW's first ever Pay-Per-View event ECW Barely Legal 1997 where the team of Sasuke, Hamada and Masato Yakushiji (filling in for an injured Gran Naniwa) came out victorious. Since then, Kai En Tai would permanently adopt the bWo colors of blue and white as their own.

Kai En Tai (with the exception of Shiryu, who was in WCW under his real name, Kaz Hayashi) made their first appearance in the WWF the night after WWE WrestleMania 14 on the March 30, 1998 episode of Raw is War. The team dropped the 'DX' from their full title due to the existence of D-Generation X in the WWF. They attacked Taka Michinoku — who signed with the WWF much earlier — because they felt he had become Americanized since joining the WWE until he later rejoined them. Kaientai was originally referred to by the announcers as Club Kamikaze, but their new manager Yamaguchi-San announced their actual name upon his arrival shortly afterwards.

Their most infamous WWF feud was with Val Venis, who had a porn star gimmick at the time. Yamaguchi was enraged when he was shown a pornographic video of his (onscreen) wife, sleeping with Venis, and threatened to punish both of them. Mrs. Yamaguchi-San was brought to the ring for what was going to be a spanking by Yamaguchi-san using a wooden paddle, but she was rescued by Venis. A week later, just as Venis had finished a match, Yamaguchi and Kaientai showed up with a salami on a table. Yamaguchi proceeded to chop the salami while shouting at Venis, "I choppy choppy your pee pee!"

After Togo, Teioh and both Yamaguchis left the WWF, Michinoku and Funaki began wrestling as a tag team using the name Kaientai. They were primarily jobbers, best known for their "Evil! Indeed!" skits in which Bruce Prichard dubbed English voices into their promos while they badly lip-synced, with Taka ending his "comments" with "Evil!" and Funaki "saying" only "Indeed!" Funaki and Taka's last ever tag team partnership as Kaientai in the WWF was a win over Raven and Justin Credible on the October 20, 2001 edition of WWF Jakked.

Michinoku eventually left the WWF. He now runs a promotion called Kaientai Dojo (or K-DOJO). Funaki remained in the WWF, finding a niche as part of the SmackDown cruiserweight division and as a backstage interviewer before being released from his contract in 2010 after 12 years with the company.[ However, he has since been re-hired and currently serves as a member of the Japanese commentary team.

--Independent circuit== On July 15, 2005, another Kaientai reunion took place at Kaientai Dojo, when Taka Michinoku teamed up with Sho Funaki, Dick Togo and Men's Teioh to do battle with Kengo Mashimo, KAZMA, Ryota Chikuzen and Kunio Toshima. Although Kaientai came up short of defeating the opposing team, it was a very emotional moment and the crowd showed their support after the match.