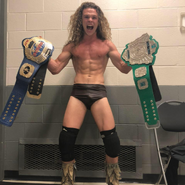 Jack Perry (born June 15, 1997) is an American professional wrestler currently signed to All Elite Wrestling (AEW), where he competes under the ring name Jungle Boy. He is part of the "Jurassic Express" tag team with Luchasaurus and Marko Stunt. In January 2019, Perry signed with the upstart promotion All Elite Wrestling (AEW), under the Jungle Boy name. He made his AEW debut at the company's inaugural event AEW Double or Nothing 2019 on May 25, competing in the pre-show Casino Battle Royale, but he was eliminated by Jimmy Havoc.