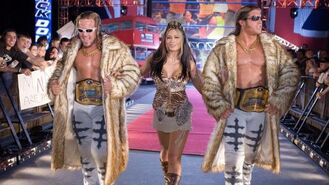 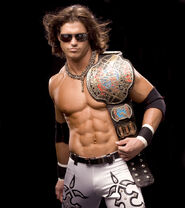 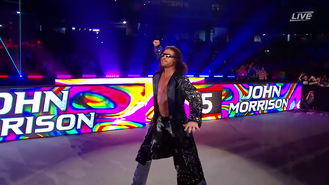 John Randall Hennigan (born October 3, 1979) is an American professional wrestler, actor, and traceur. He is currently signed to WWE, where he performs on SmackDown under the ring name John Morrison.

After leaving WWE in November 2011, Hennigan began wrestling overseas on the independent circuit under several ring names before finding success in lucha libre wrestling promotions Lucha Underground and Lucha Libre AAA Worldwide as Johnny Mundo. In Lucha Underground, Hennigan won the main event of the debut episode, as well as the first ladder match and steel cage match in the promotion's history. He is also the second Triple Crown Champion, having held the Lucha Underground, Gift of the Gods and Trios Championship once each. In AAA, he was the promotion's first-ever triple champion, holding the AAA Mega, Latin American, and World Cruiserweight Championships simultaneously. He also (with partners Chavo Guerrero Jr. and Brian Cage) won the 2016 Lucha Libre World Cup. Hennigan signed with Impact Wrestling in 2017, where he was known as Johnny Impact. He headlined the promotion's 2017 and 2018 Bound for Glory events and won the Impact World Championship once. After leaving the promotion in July 2019, he re-signed with WWE in September that same year.