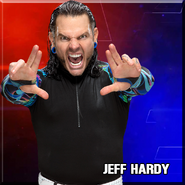 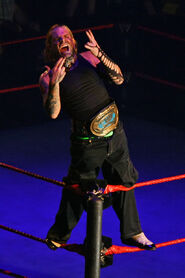 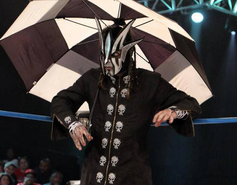 Jeffrey Nero "Jeff" Hardy (born August 31, 1977) is an American professional wrestler, singer-songwriter, painter and musician who is currently signed to WWE and also known for his long tenure with TNA.

He received his first major main event push in WWE towards the end of 2007, including challenging for the WWE Championship at WWE Royal Rumble 2008, and eventually won the WWE Championship at WWE Armageddon 2008. Hardy went on to win the World Heavyweight Championship twice, before he left WWE in mid-2009. He returned to TNA in January 2010, and in October of that year, he won the TNA World Heavyweight Championship for the first time. Moreover, Hardy is involved in motocross, music, painting, and other artistic endeavors. He is currently a member of the band Peroxwhy?gen. The band released their first studio album, Similar Creatures, on December 13, 2012 through TNA Music and their second album on November 7, 2013. Jeff Hardy is the 11th WWE Grand Slam Champion, and 18th WWE Triple Crown Champion