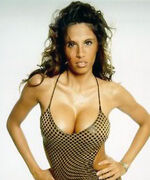 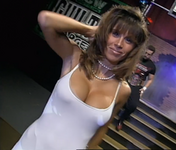 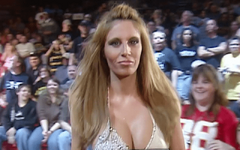 Fournier decided to train to be a professional wrestler after seeing a commercial for a training school in 1993. She trained with J.T. Smith for approximately one year at the House of Hardcore. She worked for Extreme Championship Wrestling (ECW) at house shows until the owner of ECW Paul Heyman booked her to appear on television. In the summer of 1995, she debuted in ECW as a devoted fan of Stevie Richards and later became his manager and on-screen girlfriend. The new partnership angered both Richards's tag team partner Raven and Raven's valet Beulah McGillicutty. This rivalry eventually led to several catfights between the women. Richards eventually turned on Francine due to the influence of Raven.

On June 26, 2002, Francine participated in the Total Nonstop Action Wrestling (TNA) lingerie battle royal for the Miss TNA Crown. On TNA's debut weekly PPV, Francine and Elektra had an in ring argument, leading Elektra to name Francine the reason for ECW's bankruptcy. She appeared for TNA for the next two weeks.

On June 10, 2005 Francine appeared at the ECW reunion show Hardcore Homecoming, where she acted as the valet of Shane Douglas. On June 12, she appeared at World Wrestling Entertainment (WWE) produced ECW One Night Stand 2005 reunion pay-per-view, interfering in the main event of Tommy Dreamer and The Sandman versus The Dudley Boyz. After she kicked Dreamer in the crotch, Francine was attacked by Dreamer's wife and former valet, Beulah McGillicutty. Francine then signed a contract to appear on the newly created WWE ECW. She made her first appearances with the promotion in house shows, normally competing in bikini contests with Kelly Kelly. Francine eventually began acting as the valet of fellow "ECW Original" Balls Mahoney in his feud with Kevin Thorn to even the odds against him and Ariel, Thorn's valet. Francine made her return to television on the September 19, 2006 episode of ECW on Sci Fi. On the following week's show, she made her in-ring debut as she wrestled Ariel to a no-contest in an "Extreme Catfight." She was released from her WWE contract on October 12, 2006