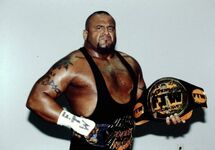 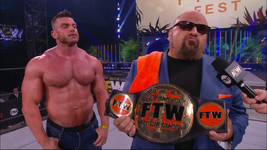 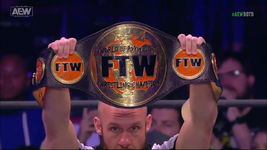 The current FTW Champion is Ricky Starks, winning the title from Brian Cage at AEW Fyter Fest Night 1 on July 14, 2021.

When the title was first created, the FTW belt was actually the same custom ECW World Television Championship belt Taz used for a while with an orange leather strap and a "TAZ" logo at the top. "FTW" stickers were strategically placed over the word "Television" in the middle of the belt as well as the United States and United Kingdom flags on the side plates. A few months later, in an attempt to persuade Taz to team with Sabu and Rob Van Dam against Shane Douglass and The Triple Threat, Bill Alfonso presented Taz with a completely new and original FTW belt with a "TAZ" logo engraved in the belt's centerplate.

According to Taz on the The Rise and Fall of ECW DVD documentary, when he lost the new belt in a match against Sabu, Sabu was legitimately upset backstage over Taz's name being permanently displayed on the belt. From then on, whenever Sabu had the belt with him, he would cover the Taz logo with athletic tape and write "SABU" on it in magic marker. The championship is owned now by the WWE, but they have not chosen to revive it.

Following Revolution, Cage said he respected Sting, to which the other of Team Taz (now having Ricky Starks, Powerhouse Hobbs and Hook) along with Taz himself, looking confused. At Double or Nothing, Cage stated he didn't want help beating "Hangman" Adam Page. So when Starks threw the FTW belt to him, he threw it out of the ring, angering Team Taz, which lead to his lost to Page.

Cage would start a rivalry with Starks on the June 11, 2021 episode of AEW Dynamite, when he chased Starks up the tunnel after Starks slapped him for not using the FTW title as a weapon for the second time. Team Taz would announce that at Fyter Fest Night 1 on July 14, that Cage and Starks would battle for the FTW championship in hopes of getting on the same page again. However, Team Taz would screw Cage out of the title when Hobbs hit him intentionally with the championship, allowing Starks to take adventage and win the championship, becoming the first person to win the FTW championship in an AEW match.