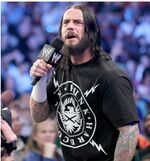 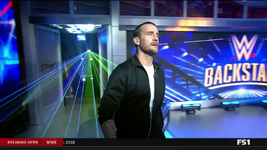 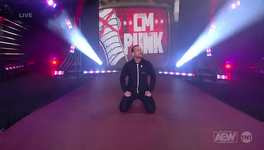 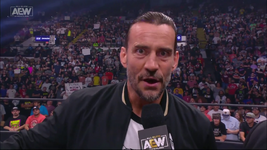 Phillip Jack Brooks (born October 26, 1978), better known by the ring name CM Punk, is an American professional wrestler, actor, mixed martial arts commentator, and former mixed martial artist. He is currently signed to All Elite Wrestling (AEW), where he competes as a professional wrestler, and Cage Fury Fighting Championships (CFFC), where he performs as a commentator. He is best known for his time in WWE, where his 434-day reign as WWE Champion stands as the sixth-longest in title history.

Brooks began his professional wrestling career in 1999 on the independent circuit, mainly with Ring of Honor (ROH), winning the ROH World Championship once. He signed with World Wrestling Entertainment (WWE) in 2005, and won the WWE Championship twice, the World Heavyweight Championship three times, and the Intercontinental Championship and the ECW World Heavyweight Championship once each. Brooks also won the World Tag Team Championship, becoming WWE's 19th Triple Crown Champion; the fastest wrestler to achieve this feat, in 203 days. He is also the only back-to-back Money in the Bank Ladder Match winner, has headlined several WWE pay-per-view events, won Superstar of the Year at the 2011 Slammy Awards, and was voted Wrestler of the Year in 2011 and 2012 by readers of Pro Wrestling Illustrated. After becoming disillusioned with WWE, Brooks retired from professional wrestling in 2014, before eventually returning and joining AEW in 2021.

Brooks has used the CM Punk moniker for his entire professional wrestling career, and his character has been consistently portrayed as outspoken, confrontational, sharp-tongued, anti-establishment, straight edge, and iconoclastic, most of which are inspired by his real-life views and personality. Depending on his alignment as a hero or villain, Brooks has emphasized different aspects of the straight edge lifestyle to garner the desired audience reaction.

After retiring from professional wrestling, Brooks pursued a career as a mixed martial artist, and he signed with the Ultimate Fighting Championship (UFC). A welterweight, he had his first professional fight at UFC 203 in 2016, losing via submission to Mickey Gall. He then lost his second fight to Mike Jackson via unanimous decision at UFC 225 in 2018 (later overturned to a no contest), and was subsequently released. Brooks then began appearing as a commentator with Cage Fury Fighting Championships (CFFC), and as an analyst on the Fox Sports 1 program WWE Backstage.

Brooks had his first leading acting role in the animated film The Flintstones & WWE: Stone Age SmackDown! (2015), and has since starred in the horror films Girl on the Third Floor (2019) and Rabid (2019), while he is slated to appear in the drama television series Heels (2021–present).