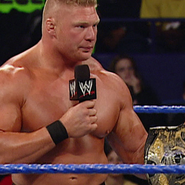 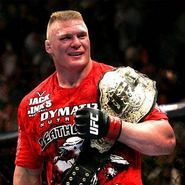 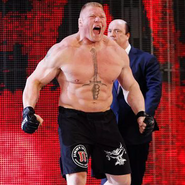 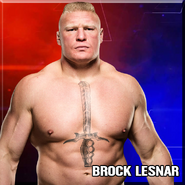 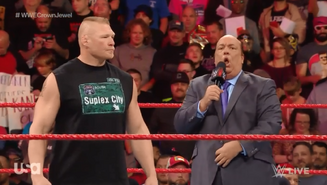 After his successful amateur wrestling career at the University of Minnesota, Lesnar signed with WWE (then the World Wrestling Federation) in 2000. He was assigned to its developmental promotion Ohio Valley Wrestling, where he was a three-time OVW Southern Tag Team Champion (with Shelton Benjamin). After debuting on WWE's main roster in 2002, he won the WWE Championship on three separate occasions with victories over The Rock and Kurt Angle (twice). Lesnar won his first WWE Championship at the age of 25, making him the youngest WWE Champion ever. He was also the WWE King of the Ring 2002 and winner of the WWE Royal Rumble 2003, making him the youngest Royal Rumble winner as well.

Immediately following his match with Goldberg at WWE WrestleMania 20, Lesnar left the WWE and pursued a career in the National Football League (NFL). He played during the preseason for the Minnesota Vikings but was cut prior to the start of the 2004–05 season. In 2005, Lesnar returned to professional wrestling and signed with New Japan Pro Wrestling (NJPW), where he won the IWGP Heavyweight Championship in his first match. After a contractual dispute with NJPW, he also wrestled as IWGP Champion in the Inoki Genome Federation (IGF).

After again leaving professional wrestling, Lesnar signed with Hero's to pursue a career in MMA and won his first fight, against Min Soo Kim, in June 2007. He then signed with the Ultimate Fighting Championship (UFC) in October 2007. He lost his UFC debut against Frank Mir and then won his second fight against Heath Herring. On November 15, 2008, Lesnar defeated Randy Couture to become the UFC Heavyweight Champion. In 2009, he was sidelined due to diverticulitis but would return at UFC 116 to defeat Interim UFC Heavyweight Champion Shane Carwin and unify the heavyweight championships, becoming the undisputed heavyweight champion. Lesnar then lost the championship to Cain Velasquez at UFC 121. In 2011, he was once again sidelined due to diverticulitis and underwent surgery.[11] Lesnar returned at UFC 141 in December 2011, losing to Alistair Overeem and promptly retired from MMA.

Lesnar was a box office sensation in UFC. He took part in five of the highest selling pay-per-views in UFC history, three of which he main-evented. Due to the pay-per-view bonuses and fight purses, Lesnar became the highest paid UFC fighter in 2010 and was on the ESPN list of highest paid athletes in 30 sports.

On April 2, 2012, Lesnar returned to the WWE after an eight-year hiatus. On April 6, 2014, at WWE WrestleMania 30, he defeated The Undertaker and ended his undefeated WrestleMania streak, and on August 17, 2014, at SummerSlam, defeated John Cena to become the WWE World Heavyweight Champion for the fourth time. Lesnar has headlined numerous pay-per-view events in WWE, including WWE WrestleMania 19.