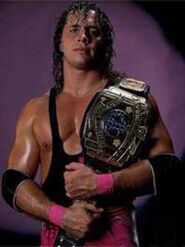 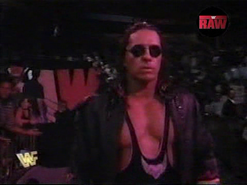 Bret Hart (born July 2, 1957) is a Canadian American writer, actor and retired professional wrestler. A member of the Hart wrestling family and a second-generation wrestler, he has an amateur wrestling background, wrestling at Ernest Manning High School and Mount Royal College. Along with his nickname the "Hit Man", Hart was known by the monikers "The Excellence of Execution", "The Best There Is, The Best There Was and The Best There Ever Will Be" and "The Pink and Black Attack". He is credited with revolutionizing the industry in the early 1990s by bringing high quality, athletic in-ring performance to the fore. Olympic wrestling gold medalist and six-time WWE world champion Kurt Angle said of Hart: "I used to watch matches of him so that I could learn the psychology of [pro] wrestling... in that ring, as a technician, there wasn't anybody better".

Hart joined his father Stu Hart's promotion Stampede Wrestling in 1976, and made his in-ring debut in 1978. He gained popularity and championship success throughout the 1980s and 1990s in the World Wrestling Federation, where he helmed The Hart Foundation faction. He left for World Championship Wrestling (WCW) following the controversial "Montreal Screwjob" in November 1997, where he remained until October 2000. Having been inactive from in-ring competition since January 2000, owing to a December 1999 concussion, he officially retired in October 2000, shortly after his departure from the company. He returned to sporadic in-ring competition in 2004 and 2006, and in 2010 with WWE, where he won his final championship, headlined that year's SummerSlam event, and served as the general manager of Raw. He headlined 9, 10, and 12, and participated in the main event of the 1997 and 1999 editions of WCW Starrcade – as a special enforcer in the former.

Hart has held championships in five decades from the 1970s to the 2010s, with a total of 32 held throughout his career, and 17 held between the WWF/WWE and WCW. He is a seven-time world champion, having held the WWF Championship five times and the WCW World Heavyweight Championship twice. He spent more time as WWF Champion than any other wrestler during the 1990s, with a total of 654 days as champion, and was the first WCW World Heavyweight Champion born outside the United States. He is also a two-time WWF Intercontinental Championship, a five-time WCW/WWE United States Champion, and a three time world tag team champion (two-time WWF Tag Team Champion and once WCW World Tag Team Champion), thus making him the second WWF Triple Crown Champion and fifth (with Goldberg) WCW Triple Crown Champion. He was the first man to win both the WWF and WCW Triple Crown Championships.

Hart is also the 1994 Royal Rumble winner (with Lex Luger), and the only two-time King of the Ring Tournament, winning the 1991 tournament and the first King of the Ring pay-per-view in 1993. Steve Austin, with whom Hart headlined multiple pay-per-view events as part of a critically acclaimed rivalry from 1996 to 1997, inducted him into the WWE Hall of Fame in 2006.