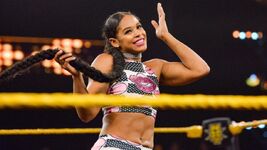 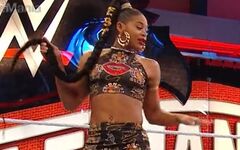 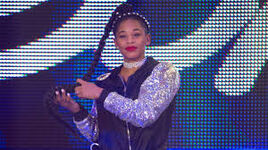 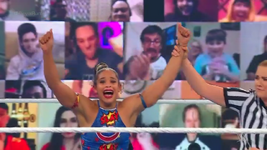 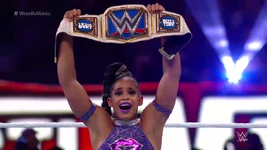 Blair entered her information into the WWE prospects database shortly after the premature end of her CrossFit career "more on a whim than with an actual plan", according to Hurd. Less than two weeks later, she received a social media message from 20–year WWE veteran Mark Henry, who had come across Blair's profile on the CrossFit circuit, saying he could get her a tryout, but emphasized that she had to do the work. After two official tryouts, Blair signed a contract with WWE on April 12, 2016, and was assigned to the WWE Performance Center in Orlando, Florida. Blair made her first appearance during an in–ring segment at an NXT live event on June 25 as "Binky Blair", where she proclaimed to be the "EST of NXT... prettiest, baddest, strongest." She made her in–ring debut in September, losing to Aliyah.

On the May 3, 2017 episode of NXT, Blair made her television debut under the ring name Bianca Belair as part of a battle royal to determine the number one contender for the NXT Women's Championship, where she was eliminated by Billie Kay and Peyton Royce. In June, Belair defeated Aliyah to qualify for the Mae Young Classic, where she defeated Sage Beckett in the first round, but was eliminated in the second round by the eventual tournament winner Kairi Sane.

After the Mae Young Classic, starting from the January 24, 2018 episode of NXT, Belair began an undefeated streak by defeating various competitors such as Lacey Evans, Candice LeRae, Aliyah, Dakota Kai and Deonna Purrazzo. On April 8, Belair made her Wrestlemania debut as she participated in the WrestleMania Women's Battle Royal at WrestleMania 34 alongside other women from the NXT roster, however, she was eliminated by Becky Lynch. On the February 19 episode of NXT, Belair would interrupt a match between Chelsea Green and Kayden Carter to cut a promo on Flair and challenge the Raw superstar to meet her on NXT. A match between the two was scheduled for the next episode of NXT, where Flair would get the victory and would injure Belair's ankle with a chair after the match before Ripley would run-in and chase Flair away. Also, this turned out to be Belair's last match in NXT.

At WWE WrestleMania 36, Belair turned face by saving The Street Profits (Angelo Dawkins and her husband Montez Ford) from Zelina Vega, Angel Garza and Austin Theory. The following night on Raw, Belair established herself as a member of the Raw roster, as she came to the aid of The Street Profits, again against Vega, Garza and Theory, which led to a six person tag match, with Belair and The Street Profits being victorious. On the August 14 episode of SmackDown she was in a battle royal to determine who faced Bayley. She eliminated Tamina Snuka before being eliminated by Tegan Nox.

As part of the 2020 Draft in October, Belair was drafted to SmackDown. On the October 30th edition of SmackDown, Belair defeated Billie Kay and Natalya in a triple threat match to qualify for the 2020 SmackDown women’s Survivor Series team.