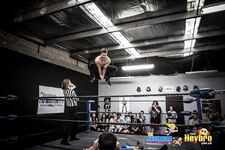 The Australian Pro Wrestling Gym was established in November 2012 and was located in Penrith, New South Wales. The Wrestling Gym was built on high quality training with a strong focus on having a positive atmosphere and a team building environment. The Head trainer was Leigh Leslie aka JAY LAW is a well travelled and very experienced wrestling trainer.

Leigh Leslie under the name JAY LAW had been a established main event wrestler in Australia for many years and had competed overseas in America, Japan and New Zealand. Leigh Leslie has trained and been involved in training many male and female pro wrestlers that have gone on to have great success in Australia and overseas.

The Australian pro wrestling gym catered to anyone looking at getting involved in pro wrestling as a Wrestler, ref, manager, ring announcer or just as a hobby.