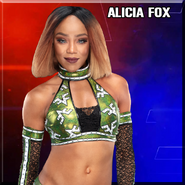 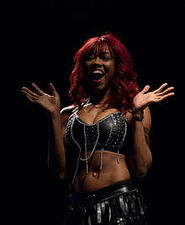 Victoria Elizabeth Crawford (born June 30, 1986) is an American model and professional wrestler best known by her ring name Alicia Fox. She is signed to WWE.

Prior to becoming a professional wrestler, Crawford was a model. She signed a contract with WWE in 2006, and debuted in Ohio Valley Wrestling (OVW), a WWE developmental territory, in July. That same year, on October 20, she won the OVW Women's Championship, but lost it the following day; her reign is not officially recognized by OVW. The following year, she moved to Florida Championship Wrestling (FCW), another WWE developmental territory, where she competed regularly until 2009. Crawford debuted on SmackDown in June 2008, using the Alicia Fox name and the gimmick of a wedding planner. In November, she moved to the ECW brand, where she managed DJ Gabriel. The following year, Fox began challenging for the WWE Divas Championship, which she won in June 2010 beginning a two-month-long reign.